Of all the actions Donald Trump has taken as President, many of us have found nothing more horrific than his policy of separating migrant children from their parents at our border. This policy has once again come into sharper focus with recent reports that our government cannot locate the parents of more than 500 separated migrant children and reunite them with their families.

This should come as no surprise to anyone. NBC News disclosed a Justice Department memo written in 2017 after federal prosecutors conducted a family separation “pilot” program and determined that children 12 and younger should not be separated because most would not be capable of finding their way back to their parents on their own.

In July of 2019, I introduced a resolution calling for the Pennsylvania House to condemn the Trump administration’s cruel treatment of migrant families… 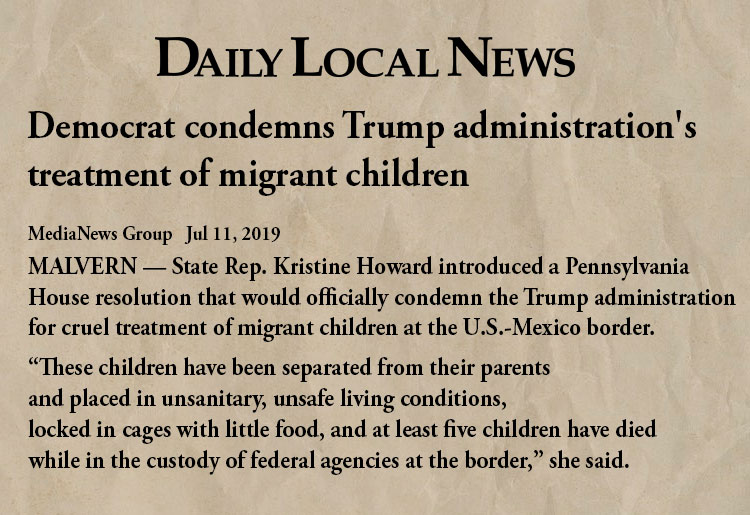 The Republican majority did not even allow debate on my resolution. By remaining silent and not stepping up to question the President’s family separation policies, the House majority’s leaders and members were complicit in in the separation of children from their parents. I absolutely do not believe Republican voters in my district support the separation of children from their families further demonstrating how the right-wing majority that controls Harrisburg is out of step with local Republicans and nearly everyone else in our communities.

There are critics who say I should “stay in my lane”, the treatment of migrant children is a federal issue. I say to them, as a mother and as an elected official who represents thousands of people who truly care about this issue, this is my lane.

The insensitivity and lack of leadership on this issue displayed by the Republican majority in Harrisburg is further evidence as to why we need to flip the Pennsylvania House form red to blue. Some would say this is simply partisan rhetoric but I say it is more.